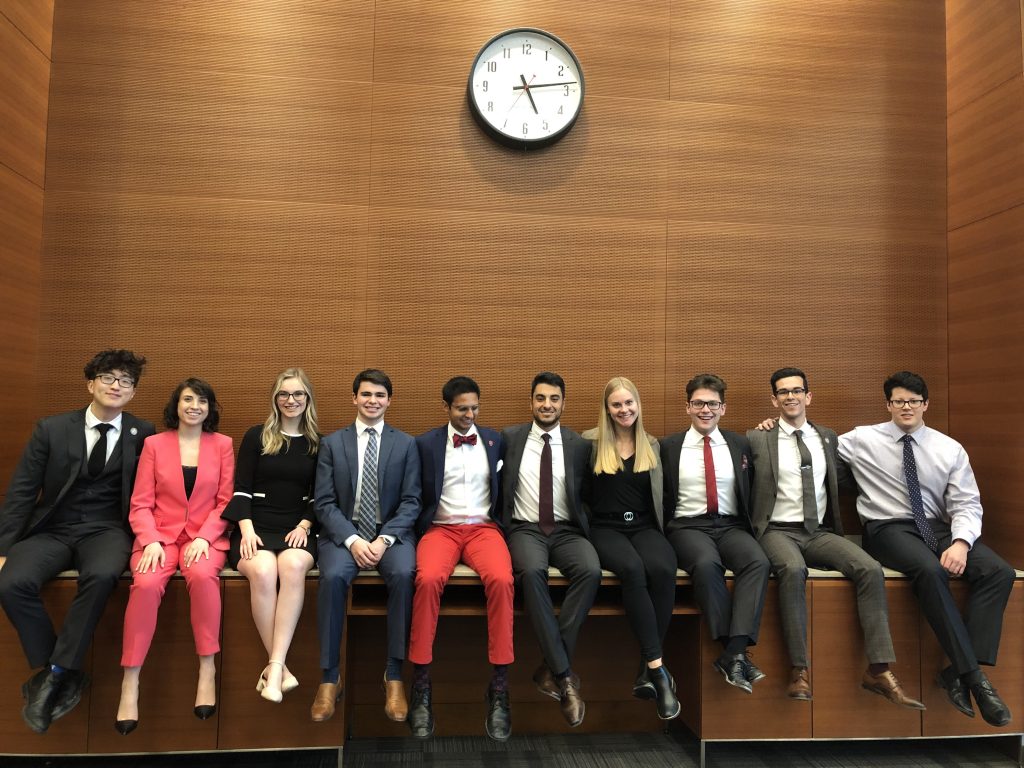 The Western University Students’ Council (USC) attended the Ontario Undergraduate Student Alliance (OUSA) Spring General Assembly (GA) this past weekend at the University of Waterloo. GAs are held twice per year where student representatives from OUSA’s eight member schools gather to revise and pass standing policy that the Home Office staff and Steering Committee use to lobby the provincial government throughout the year.

Ten Western students attended the assembly as “delegates”, representing the USC and the general interests of Western undergraduate students. The USC’s delegation included students from multiple faculties and disciplines at Western, and included both the incoming and outgoing President/Vice President teams. Of Western’s ten delegates, four were attending their first GA while the other six combined for over 25 GAs total, demonstrating a strong mix of experience and fresh perspective that the Western delegation brought to Waterloo.

During each GA, three of OUSA’s standing policy papers are typically reviewed by the over 50 delegates present from across the province. These papers make up OUSA’s policy library and are updated on four-year cycles. “One of OUSA’s major strengths is its ability to provide educated solutions to government in the form of thoughtful and carefully crafted policy,” said OUSA Executive Director and former USC President Eddy Avila, “the policies are created by students for students and form the basis for all the work we do here at OUSA.”

The Financial Aid paper considers the provincial government’s recently announced changes to the tuition framework and the Ontario Student Assistance Program (OSAP). The paper aims to articulate concerns of students following these changes and recommend changes that increases access to post-secondary education and affordability of university for undergraduate students. Topics covered range from OSAP eligibility, to data collection, to user experience.

The Gender and Sexual Diversity: LGBTQ+ Students paper addresses the unique issues faced by students in the LGBTQ+ community at member schools across the province. Topics addressed include campus climate and safety, training and education, research and information, policies, health care, and supports and services. This paper was passed with an interim status and will be revisited at the Fall 2019 General Assembly to provide more time for intersectional analysis and research.

The Student Entrepreneurship, Employment, and Employability paper focuses on ensuring undergraduate students are armed with the relevant skills to succeed in the workplace following graduation. It calls for greater access to experiential learning opportunities, increased skills development across programs, promotion of entrepreneurship on campuses, and stronger employment and labour protections for vulnerable student workers.

Following the GA, Cat Dunne, current USC Associate Vice President and Vice President-elect, shared her satisfaction with the papers passed at the assembly. “Throughout the course of the weekend, we participated in healthy debate about OUSA’s principles, concerns, and recommendations on important issues covered by each of the three papers passed. After a lot of hard work leading up to, and during the GA, I’m confident that we passed evidence-based recommendations that address the biggest concerns of our constituents.”

The USC uses internal standing policy papers, extensive consultations with Western undergraduates, input from USC services and clubs, and the direct personal experience of delegates to inform our position in policy deliberations. “As we represent a diverse group of over 30,000 undergraduates at Western, sometimes we don’t even come to a consensus on the best path forward within our delegation. This diversity of thought, perspective, and opinion represented by our ten delegates really enriches our conversation and helps us ultimately align on policy that best serves as many Western students as possible,” said outgoing USC President Mitch Pratt.

Pratt also remarked on the value that OUSA brings to Western students. “For under $4.00 per student per year, the USC gains the support of professional research and policy analysts and a formal structure to collaborate with student leaders from seven other student governments that helps align and strengthen our lobbying to the provincial government.” OUSA collectively represents over 150,000 undergraduate students from across Ontario.

Outgoing USC Vice President Danny Chang attended his first OUSA GA as a first year Western student-at-large with then-VP Lindsee Perkins, also at the University of Waterloo. “I think it’s fitting that I attend my final GA as USC Vice President back at Waterloo where my involvement in the USC all began three and a half years ago,” said Chang, who also serves as OUSA President this year. “OUSA has been a huge part of my undergraduate experience and I look back with pride knowing that together we have helped make post-secondary education more accessible, affordable, accountable and high quality.”

The USC will share the updated policy papers when they are published by OUSA here. Interested students are encouraged to apply as a delegate for the next OUSA General Assembly in Fall 2019.

IN RESPONSE TO COVID-19 SOCIAL DISTANCING RECOMMENDATIONS, THE USC OFFICES ARE CLOSED AND STAFF ARE WORKING REMOTELY.