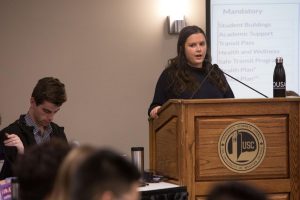 In reflecting on my time at the USC, there is one issue in particular that I would like to address. I’ve spent a lot of time at university learning about how gender issues impact our society, and I expected that these issues would be easy to identify. For instance, getting paid less than a male coworker for the same job. However, I didn’t expect that it was often the minor things that would impact me most, the small instances where I felt less respected as a woman.

One of those issues occurred after my presentation of the budget. As Secretary Treasurer, one of my biggest responsibilities over the year is to create a budget that matches our approximately $29 million organization. After months of work creating a budget, I ended the process with a 30 minute presentation to our council. Normally, the budget process is difficult enough, but due to the Student Choice Initiative I had to completely re envision and create an entirely new fee structure. I was proud of my work and the fact that it was approved unanimously by council.

Unfortunately, the next day when the Gazette article about this budget came out, I realized I was not mentioned once. Rather, the president, who spoke for two minutes during my presentation received both a quote and a photo in the article. This wasn’t the first time I felt my work was being credited to a male, nor the first time I felt the weight of subconscious gender stereotypes. After all, I am only 1 of 7 female Secretary Treasurers (formerly VP Finance) since the USC incorporated in 1965. This is an issue that all women in leadership face, but these gender imbalances are particularly noticeable in the realm of politics and finance.

When I first brought up this issue to the Gazette, I didn’t expect the reaction that I received. I instantly had four apologies from all the front office staff and the author of the article. I was especially blown away by Martin, who took time to fully understand the issue, and had a willingness to be open about this situation. From this experience, I realized that gender-bias is not always malicious. As in this case, it can be a result of gender socialization and inherent bias that takes time to unlearn and a willingness to acknowledge and rectify. I think we can all do better to address our subconscious bias, and to call attention to these issues.

Thank you to my Executive Team that supported me through this process, thank you to Martin and the Gazette team for handling this situation in a way that gives me hope for our ability to address inequality on campus. I wanted to make this public because I believe in the importance of starting these conversations. I hope that more and more people are willing to listen and address these societal issues. I also hope that more women will be encouraged to get involved in both politics and finance, and that maybe my story can give someone else confidence to acknowledge these issues.

IN RESPONSE TO COVID-19 SOCIAL DISTANCING RECOMMENDATIONS, THE USC OFFICES ARE CLOSED AND STAFF ARE WORKING REMOTELY.